Some Thoughts on Volatility Strategies

This is a critique of a front page article in Pensions & Investments on April 16, 2012 and an Investment News article about Dr. Robert Haugen’s strategy.  It seems all one needs to know is what the volatility WAS of a stock or a manager or a portfolio and one can pick the stocks that will outperform all others, the manager who will beat all others and last but not least, the asset allocation strategy that would have done best in the past.  That’s right!  It is all based on the standard deviation of historic returns over some brief period of time.  Many studies have shown that a time series of historic returns tells you nothing about future returns.  But now we are told the standard deviation of those returns can predict future outcomes.  Therefore, all you need is a hand held calculator and Voila, you are a portfolio manager. 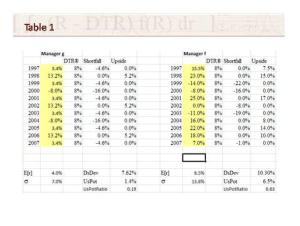 Which manager should you hire? The new volatility theory says to choose the one with the lowest standard deviation.  Yes, it has a lower expected return, but that doesn’t matter because this is supposed to predict the winner, not the expected return.  You will notice that the mean is an arithmetic average and as Einstein said, it is the geometric average that is most powerful. The standard deviation captures the risk of not achieving the expected return.  We do not believe that is what is at stake.   More importantly, the mean and standard deviation ignore the return one has to earn on assets in order to meet some future pay outs, like retirement benefits.  We call this link between assets and liabilities the Desired Target Return® or DTR®.  So, we believe the mean is the wrong focal point and deviations about the wrong focal point have nothing to do with the risk of not achieving the DTR needed to accomplish your goal.

However, maybe by plotting the returns of managers g and f (see Figure 1) it will be easier to see what the value is of the low volatility strategy.

Hmmm, the black line does go up and down more so it must be more volatile.  But why is that, in and of itself, important?  Are we now to ignore the concept of a risk-reward trade off and look only at the wrong risk component?  The theoretical foundation of this strategy is still not clear to me.  Maybe that is because it has no theoretical foundation.  Let’s recast these returns in terms of Post Modern Portfolio Theory[i] (PMPT).

Figure 2 uses the bootstrap procedure of Bradley Efron at Stanford and the three parameter lognormal of Aitchison and Brown at Cambridge to obtain a forecast of what could happen in the future.  This forecast is based on what could have happened, not just what did happen, in the past.  This has been tested at the Pension Research Institute in a project with Dr. Robert van der Meer when he was at Shell Oil, Netherlands.  Based on this evidence we believe it is a superior way of estimating what could happen than simply calculating the first and second moments from a time series of historic returns.

Figure 2 shows that the distribution of returns for manager f  is mostly to the right of manager g.  Therefore, f dominates g by 2nd degree stochastic dominance rules (SSD).  We mention this only as evidence that there are more rigorous ways of ranking   But you don’t have to understand SSD to see that anyone who has to earn 4% or more (DTR = 4%) would prefer f regardless of his or her risk tolerance.  Just look at how much of the distribution of g lies below the DTR.  Half of it, as opposed to a tiny bit of distribution f.

Well, making investment decisions based solely on the probability of a good outcome relative to the probability of a bad outcome is really dumb.  The probability of your parachute not opening if you jump out of an airplane is very small.  But if it doesn’t open, the magnitude of pain you will suffer is not captured by the small probability.  How many times have you heard of a financial disaster that had only a small chance of occurring?  So, both the upside and the downside should have a magnitude factor as shown in Figure 3.

The probability of exceeding the DTR is shown in blue but the upside potential has a magnitude factor that extends to the green arc.  This implies, getting 2% more than your DTR is good but getting 4% more is twice as good.  On the other hand, returns below the DTR are squared so that 2% below becomes 4% and 4% below becomes 16%. The equation for the upside potential ratio is shown in Figure 4.

Is there a theory to support this calculation?  Yes, it is called Behavioral Finance[ii].  Our good friend Hersh Shefrin at Santa Clara University told us about studies claiming that investors don’t discuss their preferences in terms of mean and standard deviation.  Instead they say they want upside potential and downside protection.  The equation for the Upside Potential Ratio that we developed with our colleagues at Groningen University was published in the Journal of Portfolio Management.

Has there been any rigorous testing of this approach to forecast future outcomes?  Yes, Figure 5 presents the results of a study performed by Bernardo Kuan when he was at the Pension Research Institute.[iii] 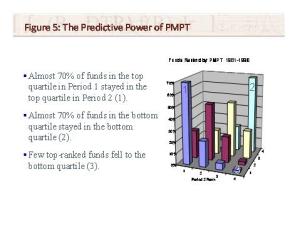 We believe this is a very impressive study of predictive power.  You may do better for awhile using a simple heuristic rather than PMPT.  But some day, if your supposed theory doesn’t work, you may have to explain to someone why you never bothered to calculate the return on assets needed to accomplish the investment goal.  This reminds me of the American doctors in the late 1800’s who didn’t think it was necessary to wash their hands and sterilize their equipment before an operation.

Finally, as a response to Mr. Taliaferro at Acadian who wrote, “Because risk is measured on a relative basis, a portfolio that moves up and down less than its benchmark is perceived as more risky on a relative basis because it is considered less correlated,” we offer the following:”

End Notes:
[i] For the foundations of this theory see, “Managing Downside Risk in Financial Markets”, and “ The Sortino Framework for Constructing Portfolios” on Amazon.com.

[ii] See page 7 of  “The Sortino Framework for Constructing Portfolios.”

[iii] See Chapter 3 in  “The Sortino Framework for Constructing Portfolios.”

Frank Sortino is finance professor emeritus from San Francisco State University and Director of the Pension Research Institute which he founded in 1981. For 10 years he wrote a quarterly analysis of mutual funds for Pensions and Investments Magazine and he has written two books on the subject of Post Modern Portfolio Theory. He has been a featured speaker at many conferences in the U.S., Europe, South Africa, and the Pacific Basin. Dr. Sortino received his Ph.D in Finance from the University of Oregon and has carried out research projects with many institutions like Shell Oil, Netherlands and The City and County of San Francisco Retirement System.
View all posts by Frank Sortino →
This entry was posted in Uncategorized and tagged investment, PMPT. Bookmark the permalink.